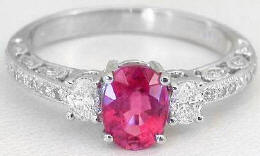 One of the world’s renowned mining areas is the state of Minas Gerais in Brazil. The location produces some of the finest tourmalines, aquamarine, morganite, chrysoberyl, and emerald, just to name a few. Mining is a very risky and difficult task as it is always a gamble as to whether or not exceptional gem deposits will be found. One amazing story involves the Jonas mine located in Minas Gerais. In 1978, the mine was thought to contain large deposits of rubellite tourmaline, but after 6 months of digging with absolutely no good results, the miners only had financing for one final week of digging. One of the miners had a premonition of a huge gem pocket which encouraged the miners not to give up and to keep digging. As luck would have it, they found a truly magnificent pocket that once excavated was 8 by 10 feet in size. It had almost 450 pounds of spectacular rubellite tourmaline crystals. One crystal was large enough to yield a million dollars worth of cut gems. A smaller second pocket was also found but it was not as spectacular as the first. Although mining at this location was essentially exhausted after a couple weeks of excavating, the miners hard work sure proved to be worth it.

It is interesting to think about all the things what could have happened to cause the difference between a 100% loss of their investment and their big payoff. The pocket containing the crystals was on 8 by 10 feet. Imagine how easy that would have been to miss. Imagine how many gem containing pockets have been missed by other miners in the past and how many must be out there.

Fun Fact: The Natural Pearl Industry was a by-product of the Button Industry

Today, nearly all pearls, whether they are Akoya, freshwater, Tahitian or South Sea, are cultured, meaning that a pearl formed as a result of human intervention. Prior to pearl culturing, which began around 1900, pearls were completely natural. They were formed by the mollusks on their own as a result of an irritant getting inside their shell. The farming of natural pearls was not a business in and of itself because divers would sometimes have to recover hundreds and hundreds of mollusks just to find one pearl. It just wasn’t cost effective. 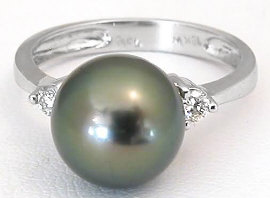 The natural pearl business was actually a by-product of the button business. Buttons were once made from natural mother of pearl, the nacreous layer inside the shell of a mollusk. Whenever the mollusks were harvested and a natural pearl was present, it was set aside. Natural pearls were a symbol of status and wealth and were highly coveted. By the 1920′s, the button business had transformed and buttons were being manufactured in mass quantities from plastic. This caused a huge decline in the natural pearl market since the mollusks were no longer being harvested. Today, it is too costly to dive for natural pearls and the business isn’t really viable. So natural pearls are very very rare. Today almost all pearls in pearl jewelry are cultured pearls. This includes all pearls sold at MyJewelrySource.

We all know that gemstones look different in flourescent, incandescent and sunlight, but did you know that gemstones also have a different color based on where you view it in the world (i.e., your latitude)? For example, a Burmese ruby that looks pinkish-red in Burma will appear a beautiful red in Japan. But a beautiful red ruby in Burma will appear darker in Japan- too dark, in fact, such that it would command a lower price.  Ruby buyers therefore purchase different color shades of ruby (as it appears to them in Burma) depending on what market they are buying for.