We love emeralds and are drawn to their inviting green hue but choosing one with the fine quality attributes that we want to offer our customers take time and patience!  Emeralds are available in an extremely wide range of qualities and some of the treatments many emeralds on the market receive today are even somewhat questionable (not accepted as a standard practice or even not permanent or durable).  Emeralds are commonly found with clarity characteristics and the practice of treating emeralds with oil or resin is a common and accepted method for improving an emerald’s appearance. Some emeralds are treated with a tinted oil which actually helps to color the emerald green. This practice is not accepted in the industry and MyJewelrySource does not sell any emeralds that have been color enhanced. The most desirable hues for emerald are bluish green to green. If an emerald is too yellowish, the value is diminished. We offer a range of fine quality emerald rings with gems that have been hand selected for their balance of color, clarity and size. 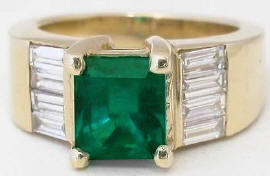 One of a Kind 2.82 ctw Emerald and Baguette Diamond Ring

One of our favorites is our petite oval emerald ring, GR-5454 (shown on right), which features a 6x4mm emerald surrounded by a diamond halo with two rows of diamonds in the band. The emeralds we use in this design have a lighter tone with a green hue. They are transparent and not cloudy or hazy which you would find with lower quality emeralds.

One of our finest quality emerald rings, for those of you looking for a very special one of a kind design, is our GR-5213 (shown on left). This spectacular design showcases a 1.8 carat emerald cut emerald with an outstanding slightly bluish green hue, medium tone and saturation. This emerald just dazzles as the focal point in the heavy yellow gold ring set with one carat of fine quality, near color baguette diamonds.

Gemstone mining is typically a very primitive operation. That, combined with political instability, government restrictions, difficult terrain, sporadic deposits and even crime, makes one truly appreciate what goes into bringing the beautiful gems we see to the marketplace.

Many gemstones are mined by individual miners working with old-fashioned picks, shovels and wash pans, reminiscent of the days of the California gold rush. The work is very strenuous. And since gemstones are generally found in veins that are spread across vast areas, the mining process is very difficult and slow. Sometimes a vein is mined out in just a few months and sometimes it’s years. Emerald mining actually began in ancient Egypt beginning in about 3500 B.C. Today, Colombia is where most exceptional emeralds are mined, but that is a very dangerous place. Miners often work along side armed bodyguards, and even gem wholesalers traveling to Bogota have to be very careful. Other emerald sources include Brazil, Zambia, Zimbabwe, Pakistan, Afghanistan and Madagascar. The Panjshir Valley in Afghanistan also produces some of the finest emeralds in the world. But the production is uneven because of modern wars and safety concerns. Foreign dealers must have the protection of local authorities. The mountainous regions mined in Afghanistan consist of narrow tunnels in very hard rock. When Afghanistan was at war with the Soviet Union, emerald miners tried to make something good of an otherwise bad situation. They would actually place burned out vehicles in areas they wanted to mine. The vehicles attracted the Soviet bombs which then broke up the hard rock and made the mining a bit easier.

Stay tuned to this blog for much more on gemstone mining, emeralds and everything that goes in to creating a beautiful emerald ring.